A Family's Ten Years at Sea 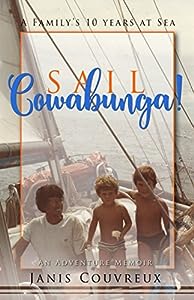 Sail Cowabunga! A Family's Ten Years at Sea is a nonfiction travel memoir written by Janis Couvreux. Couvreux had inherited a taste for adventure from her dad, who would regale the family with his tales about life as a student in Switzerland after serving in the armed forces during WWII. She knew she wanted to be a journalist, a foreign correspondent, and decided that spending a college year as an exchange student in France would help her polish her fairly flimsy grasp of French. What she never expected was that she’d find the love of her life while there and would move in with him shortly after she had arrived in Bordeaux. Michel had also been bitten by the adventurer’s bug and had already hitchhiked across the length and breadth of the United States, and had interned for an architectural firm in California. Michel was in his senior year at the School of Architecture when they met and would, shortly after graduating, open his own architectural firm. The two of them needed more than just the success of his company to feel their lives were complete, however, and when they accepted a friend’s invitation to travel aboard his sailboat to Spain, they realized that sailing could be their next adventure. It would take some years of preparation: finding the right boat and preparing was just the beginning, but it finally happened. The young family with two small boys then set out to discover the world from the deck of their sailboat and would spend the next ten years doing just that.

Janis Couvreux’s nonfiction travel memoir, Sail Cowabunga! A Family's Ten Years at Sea, is a marvelous account of a most spectacular adventure. Janis and Michel, relatively inexperienced at sailing, would cross oceans and live on their wits while caring for an infant and a small child. Couvreux shares their triumphs and their mishaps, including the challenges of a boat that needed relatively frequent maintenance and learning about currents, storms and the oddities of nature first hand. I was particularly fascinated by her accounts of their travels through South America and found I was falling in love with Curacao without ever having been there myself. I also appreciated the efforts they made to ensure that their sons had ample opportunities to interact with other kids and experience schools within different cultures. Couvreux’s memoir is beautifully written, and makes it so easy to get caught up vicariously in the family’s experiences. Sail Cowabunga! A Family's Ten Years at Sea is most highly recommended.