Humor, Horror and Revelation in, on and around Toilets, Tubs and Showers 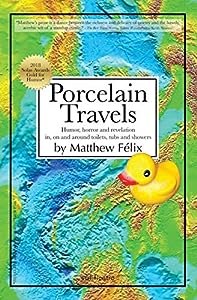 Winner Gold for Humor 2019 Readers' Favorite Awards!
"Felix returns with an offbeat...funny collection." - Publishers Weekly
"My new favorite...a very funny book." - Peter Greenberg, CBS News Travel Editor
#1 Bestseller in Travel Humor & Literary Travel
Foreword INDIES Book of the Year Award Finalist
Winner of Four Solas Awards! including Gold and Silver for Humor
Amazon best-selling author of With Open Arms: Short Stories of Misadventures in Morocco
Matthew Félix is not a luxury traveler.
His unorthodox bathing practices in Paris. The Dead Sea shower incident that led to an arrest. The nightmare while he was trapped on a bus without a bathroom in Anatolia, his retelling of which won Gold for Humor in the 2018 Solas Awards.
Maybe it's Matthew's no-frills approach to experiencing the world that gets him into situations that are sometimes hilarious, sometimes cringeworthy. Perhaps it's his questionable willingness to put up with more than most, as seen in his Amazon best-selling With Open Arms. Whatever the reason, whether he's describing a kitchen with a toilet, reliving that time a pudding pop froze to his lips, or recalling when his friend set herself on fire in his apartment, Matthew finds humor in the everyday as much as in the bizarre.
His literary style and spirited wit have garnered him comparisons to Sedaris and Bryson, while Best Travel Writing II contributor Keith Skinner called Matthew's prose "a dance between the richness and delicacy of poetry and the bawdy, acerbic wit of a standup comic."
Porcelain Travels is sometimes laugh-out-loud funny, occasionally shocking, and always entertaining.
Videos and more: matthewfelix.com/porcelain