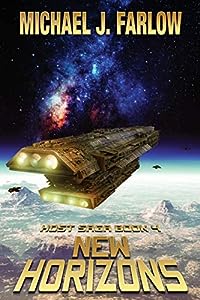 New Horizons is the fourth book in the Host Saga series by Michael Farlow, a fantastic science fiction story that features a phenomenal conflict, higher levels of weaponry, and technology. Humanity is facing the most devastating threat ever: the Arkon attack is imminent! Aided by an AI companion and teacher left on Earth by the Galactic Host, Van Childs prepares for the ultimate assault from the Arkon, seeking allies and developing the Host technology that could withstand the assault. But the progress in allied shipbuilding is impaired by piracy and something more disturbing happens — an unexpected attack engineered by the Arkon that destroys the allied fleet and Zarminia. Can the cruiser New Horizons help, and can Van Childs get the New Horizons ready before it's too late?

New Horizons is one of the best things I have read in science fiction for a while now and I was left with the impression that this author is a shipbuilder in real life. First, the reader is introduced to a phenomenal conflict, a monumental threat looming over humanity. The plot is intricately done and readers will enjoy the complexity in the relationships — humans with humans and humans with artificial intelligence entities. The language is beautiful, crisp, and enriched by the witticism that flows through the exciting dialogues. The novel is action packed, intense, and emotionally charged, one of those books readers would enjoy on screen. The concept of the book is bold, the language confident, and the plot so cunningly done it keeps the reader's imagination gripped. You'll fall in love with the characters and you will care about them so much you want to see where they move from here. New Horizons is engrossing with the complexity of a chess game.