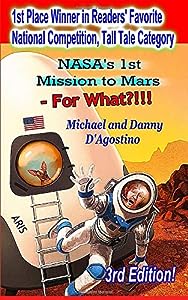 NASA's 1st Mission to Mars — For What?!!! by Michael and Danny D'Agostino is a satirical comedy that answers the question: Why spend billions to send someone to a planet as harsh as Mars and why send someone who is not a career astronaut, but a penniless man who lives on the fringes of society in a cardboard box and who earns his keep by begging on the streets? Stanley Marczek is penniless, a man of grit who has learned to survive in extremely harsh conditions. He is tired of his cardboard box and begging on the streets, and the opportunity to escape his miserable lifestyle and the incessant pursuits of his ex, whose need for money never diminishes, presents itself in the form of an ad by NASA to travel to Mars for $3 million. And he ends up being NASA's favorite choice, but why?

Michael and Danny D'Agostino have created a compelling character in Stanley Marczek and readers become interested in him because of his outspoken character, his emotional and psychological depth, and the humanity he exudes. This is your perfect blend of sci-fi and comedy with powerful satirical undercurrents. I enjoyed the way the protagonist’s world is portrayed and readers will easily relate to him. Apart from exploring the benefits and raison d’être of the mission to Mars, this novel explores the protagonist’s relationships with people in Tent City, his girlfriend Hannah, a Viet Nam veteran, and his dog. The story is well-written and readers can feel the excitement as an unusual character gets picked for NASA’s mission, but his return to earth raises questions that should be considered in real life. The writing is awesome and readers are pulled in from the very first page. The story is told from the perspective of the protagonist in an absorbing kind of way. NASA's 1st Mission to Mars — For What?!!! is a work of great entertainment, but one that asks questions that need serious answers. Get ready for a delightful ride as you pick this book up.