Music to My Years, Life and Love Between the Notes 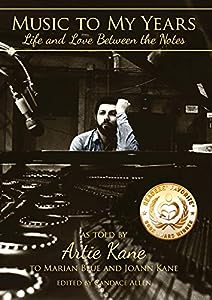 Music to My Years, Life and Love Between the Notes is a nonfiction memoir as told by Artie Kane to Marian Blue and JoAnn Kane. Artie Kane was a musical prodigy who began taking piano lessons when he was three and a half years old. He was born Aaron Cohen to Nathan and Sarah, both emigrants. Sarah and her family hailed from Belarus, and retelling the story of how Aaron’s great uncle Leib Zager spearheaded the family’s drive to move to the United States was a family tradition and part of their family lore. Artie’s dad died when he was only three, but his Uncle Joe was to be a most inspirational father figure. Uncle Joe gave him music, encouraging the musical skills he had inherited from his father’s side of the family, and being a supportive presence in an often overwhelming family household comprised of five adults and him as the sole child.

Aaron’s mom had high expectations for her talented son and made those dreams the guiding practice of her life. She would sacrifice to get him the best lessons and opportunities, at one point moving with him to New York City to enable him to study with a gifted teacher, but her need to control every aspect of his social life led to some friction between the mother and son. Opportunities, such as the job he got playing at a local radio station, helped him establish some necessary distance from her and gain a modicum of independence. Aaron’s growing interest in jazz and non-classical genres was a disappointment to his diminutive powerhouse of a mother, but as his musical taste expanded, his skills would be increasingly honed and harnessed to crafting more music and living his dream. Following advice given some years earlier, Aaron Cohen legally changed his name to Artie Kane, a name which has become synonymous with the scores composed and played for dozens of Hollywood movies and television shows.

Music to My Years, Life and Love Between the Notes is a beautifully written autobiographical work that spans Kane’s fifty years working in the music and movie industry. His stories come complete with archival photographs showing him at work and play with music’s and Hollywood’s legendary figures --people like Henry Mancini, Jack Benny and Quincy Jones. Kane’s descriptions of his eight marriages, three children and the palimony suit that capped a hellish relationship are frankly and acerbically shared. Artie has realized throughout his life that his social skills were not quite on a par with his musical talents, not by a long shot, but as his story shows, his effort to improve them has made some impact.

When the reader gets to wife number eight, there’s a sense of shared jubilation and relief that one can’t help but feel; that this guy you’ve come to admire finally gets the right girl. It’s like a plot from a movie at that point; the place where everything comes together and authors and readers are on the same, marvelous page. I learned so much about Artie Kane; about the music which makes so many movies and shows work so well; and the composers and musicians behind those efforts. I loved seeing those photographs and the way the Kanes and co-author Marian Blue make Hollywood in the latter part of the twentieth century come to life, complete with the frivolity and the social climbing, but more so the dedication of the people working behind the scenes. Music to My Years, Life and Love Between the Notes is a big beautiful work of art that just happens to be a memoir as well. It’s most highly recommended.