King Of The Nine Hells 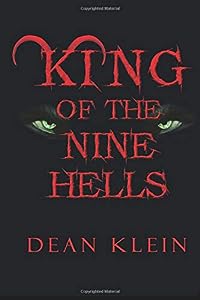 A beautifully written fantasy with an international setting, King of the Nine Hells by Dean Klein is a riveting story that will find a comfortable home with readers who enjoy well-crafted stories of dark magic and fascinating characters. It begins in the Dark Ages, with a grave-digger who works on the moors late at night to assemble a grotesque book. His work done, he uses the cursed book to establish himself as head of one of the strongest families known in Scotland. Fifteen hundred years later, a merchant steals this book, without knowing what it really contains, and the book eventually finds itself in the hands of an Oxford University professor who has a deep knowledge of occult practices. It takes little time for Dr. Peter Ashford to realize that the book is deadly. Making a firm resolution to destroy it, he discovers, to his utter stupefaction, that the book is missing. Follow him in a dangerous adventure in search of a possessed book that has the power to destroy the whole of humankind, a book that is linked to Hell.

The story is deftly written and as well as the sophisticated characters, readers encounter a powerful character in the ancient book itself, a book from Hell with wonderful powers. It can hear those who speak in a room, knows who speaks, and has the power to grant the wishes of anyone. Ancient castles, elements of the Dark Ages, quirky characters, and unspeakable horrors are what readers will find in these pages. It is dark and gripping, yet you won’t be able to let go. King of the Nine Hells cast a spell on me and I found myself reading from page to page. Peter Ashford is a great character and the reader wants to know what happens to him from the moment the book gets into his hands. I kept on wondering if he will retrieve it, if he can stay alive long enough to destroy it, and what would he need to destroy the book. King of the Nine Hells by Dean Klein is a great achievement, pulsating and utterly engrossing.