A timid girl. A young soldier. A love story. 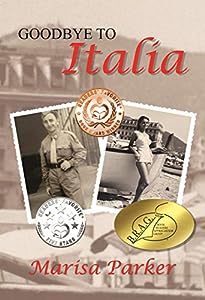 A pretty little Italian girl skips outside to peer up at the unexpected drone of aeroplanes, unaware of the danger as her neighbour, an eccentric opera singer, fervently prays for her teenage son. It is the start of WWII. An age difference of thirteen years separates the little girl Mariolina Martore and the army officer Eugenio Piergiovanni, but their lives are destined to intertwine.

Mariolina is a timid but stalwart child who lives with her mother and grandmother. During the war years, they endure bombings, cold, hunger, and disease in Torino, Northern Italy.

In contrast, Eugenio, a teenage soldier, is captured and spends six years in African prisoner-of-war (POW) camps—one of which boasted 63,000 prisoners at one time. Eugenio’s transition into adulthood during captivity, as told through his diaries, makes for bittersweet humour as he strives to find laughter in sad situations.

Goodbye to Italia is a non-fiction romantic story of Italian drama, courage, and humour. So as to stay true to the retelling by my mamma and papa, and to capture the essence of living through those times, the chapters in the first half of the book interchange between the two diverse characters, Mariolina and Eugenio, as they come of age.