From Shoeshine to Star Wars

The Chronicles of Walt Jourdan 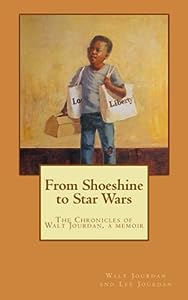 "From Shoeshine to Star Wars: The Chronicles of Walt Jourdan is a compelling memoir that chronicles the life of father and son as they overcome obstacles and face the challenges that only a migrant trying to create meaning in life in the US can face...[it] is both engaging and inspirational, a story I’d love to see on screen. Five Stars." ~ Christian Sia for Readers' Favorite

Little Walt is a nine-year-old Colored boy in 1937 Oakland, California. The Great Depression is in full swing, offering little opportunity for Little Walt to do more than shine shoes and sell magazines to help his family make ends meet.

Big Walt, his father, quit school after eighth grade, but applied his resourcefulness to own and operate several businesses, including a boarding house, barber shop, cab company, gas station, a baseball team, a used car lot, and an illegal gambling house.

Little Walt had to use his own resourcefulness to break the mold, and he went on to achieve success on the gridiron, as a sailor in the Korean War, and in a society bent on maintaining a culture of subservience for African Americans.

But it was not to be a smooth upward trajectory for Little Walt. He struggled to maintain focus after family tragedies, and faced many obstacles, both cultural and personal, as he endeavored to raise a family – ultimately ending in a place no one could have predicted when he lugged his shoeshine box ten miles a day as a nine-year old boy.