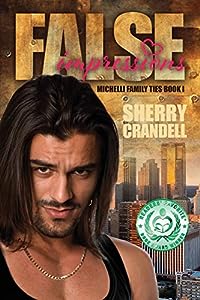 With an exciting setting in contemporary Texas, False Impressions by Sherry Crandell is a delectable first entry into the Michelli Family Ties series, a tale of love, attraction, and family dynamics in an unusual context. When Tabitha Jennings - “TJ” - accepts a job far from home, she secretly tells herself she’ll be making a new start in life after a painful breakup. But then she quickly finds out that she’s actually been hired by a mob family. It’s too late to turn down the job, and the dynamics of this family are nothing like anything she’s known. Follow her adventure as she learns to meld with the family, but things get complicated when she begins to feel an irresistible attraction for Dominic, the grandson of the Michelli patriarch. Does she have the strength to stay away from him? And what has Jesus got to do with it? It will be interesting for the reader to find out.

False Impressions is beautifully written and the title is brilliantly justified, a story that is as inspiring as it is entertaining. I enjoyed the way the Michelli family is constructed, where the reader won’t expect to find openness of spirit. But, surprisingly, there is an intimacy shared among the members of this family that will surprise readers. The narrator says somewhere that there weren’t any secrets in this family and that everyone spoke openly and freely, an atmosphere that is nurtured by the fact that they have suffered a lot together. The author explores themes of family, love and lust, temptation and faith, allowing her message to simmer in the beautiful prose in a natural way. Sherry Crandell is a great storyteller and she knows what it takes to build strong conflict with human emotions. A very delightful read, indeed!