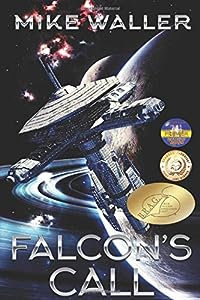 Falcon’s Call, written by Mike Waller, is a nail-biting, fantastical science fiction thriller that puts you on the edge of your seat. Joseph Falcon, a retired naval officer and now the captain of a freighter spaceship named “Butterball,” was exploring an asteroid belt deep in the solar system when he was called back to a space station named Kepler. Once he got back, he got the shock of his life. A UFO had been sighted not too far from where he had been exploring, and his new objective was to find out if the space ship was derelict, or if it still had living inhabitants on board. With his new history-changing objective, will Joe Falcon and his crew of what the world usually called “misfits” have what it takes to embark on the most important mission in the history of mankind? Or will they fail and miss out on this once in a lifetime anomaly?

Falcon’s Call by Mike Waller was a very deep, mind-boggling, but very exciting book. I thoroughly enjoyed reading this story. It had many twists and turns, making it very hard to put down. The characters were well defined, and each played an important part in making the story come alive. I thoroughly enjoyed the story. With its fascinating different aspects, it had a way of keeping you on your toes. The science fiction Star Wars meets ET theme made this an awesome read. From murder to mayhem, this book has it all! Because Falcon’s Call has some violence and graphic scenes, I would suggest that only a more mature audience read this book.