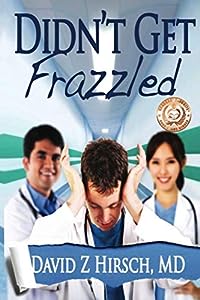 Medical student Seth Levine faces escalating stress and gallows humor as he struggles with the collapse of his romantic relationships and all preconceived notions of what it means to be a doctor. It doesn’t take long before he realizes not getting frazzled is the least of his problems.

Seth encounters a med student so arrogant he boasts that he’ll eat any cadaver part he can’t name, an instructor so dedicated she tests the student’s ability to perform a gynecological exam on herself, and a woman so captivating that Seth will do whatever it takes to make her laugh, including regale her with a story about a diagnostic squabble over an erection.

Didn’t Get Frazzled captures with distressing accuracy the gauntlet idealistic medical students must face to secure an MD and, against the odds, come out of it a better human being.

This comedy-drama is an exciting addition to the grand tradition of medical novels by Samuel Shem, Lisa Genova, and Noah Gordon.

"Didn't Get Frazzled lets you live the medical school experience from a safe and sane distance. It's most highly recommended." - Readers' Favorite