Accidental Travels of a Single Woman 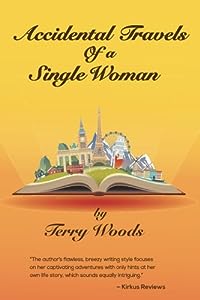 Five years after her move to Las Vegas, Terry develops an allergy to the intense heat. After she decides to leave the city every summer, she discovers the benefits of "The Affordable Travel Club" and European home exchanges. Terry winds her way primarily through Canada, the United States, and Europe, where there's a little Italian romance to boot.

Highlights of her travels include month-long stays with people in France and Italy. As a motivational speaker, Terry is eager to become an integral part of their exciting lives.

Ms. Woods’ humor weaves its way throughout the book, showing up in the most unlikely situations. In Madrid, Terry wanders around aimlessly during the prince’s wedding procession until she's stopped by the police. Ultimately, her humor convinces them that, surely, she is not a terrorist bomber.

The day George Clooney announces his decision to get married on Lake Como, Terry is there. She's staying one small town away from where Mr. Clooney owns a villa. Terry writes about Italy’s newest gossip frenzy as she answers the frequent question, “Do you think Mr. Clooney's wedding place is a secret?”

During her travels through different countries, Terry shares thoughts and feelings of those people who impact her greatly. She also writes poignantly about what it means to be part of the world in today’s day and age.

“Fate puts Terry in a circle of thinkers and doers. In France, she finds herself in the company of the doctor who created the abortion pill, a famous pianist, and a well-known painter. Its unexpected variety is what makes this an exciting and entertaining read. At its heart, the book celebrates the spice of life and new experiences that can change the way you think.” - San Francisco Book Review


“The author’s background as a journalist is obvious in her flawless, breezy writing style. The book concentrates almost exclusively on her captivating adventures, with only hints of her own life story, which sounds equally intriguing.” - Kirkus Reviews
Contact Author -