The Girl Who Made Them Pay 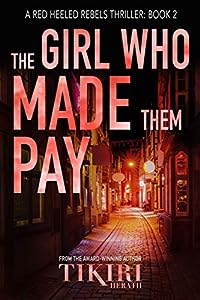 Abducted is the second book in the Red Heeled Rebels series by Tikiri Herath, a suspenseful thriller with strong characters and intriguing themes. When Asha and Katy arrive at London's Heathrow Airport, they are sure they have left behind the terror that haunts them. But a few hours after their arrival, Katy disappears. Asha frantically searches for her friend across the city, with the border police on her tail. She follows a shadowy woman to a house that holds deadly secrets, but will her friend be there and what awaits them?

This novel is filled with twists and surprises in the plot that readers won’t see coming. The story takes readers across major cities and countries, from London to Brussels to Luxembourg, following a crime story that is expertly plotted and skillfully written. The international setting adds to the exhilarating sense of adventure that accompanies the sleuth work in this novel. The characters are extraordinary, multidimensional, and real. Asha was my favorite, and I enjoyed the bond between her and her friend, which makes the premise of the story even stronger, for it is that friendship at stake when Katy goes missing.

The writing is fluid, with measured sentences and a phraseology that is designed to add to the dramatic depth of the story. I enjoyed the timely paragraph breaks, the careful selection of words, and the mesmerizing narrative tone. Abducted: An International Suspense Thriller is filled with thrilling action; an engaging story that will have readers on the edge of their seats for hours.