The Fight For Vietnam's Firebase Kate 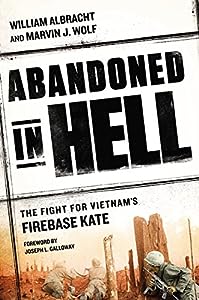 I have read a lot of books about war, from ancient battles to the present. I like them maybe because I am a veteran myself. But none has moved me, none has taken me there and made me as proud to be an American fighting man as Abandoned in Hell by William Albracht and Marvin J. Wolf. It is the story of the fight for Firebase Kate during the Vietnam War. I have never read anything quite like it. It reads like a cross between an official Army after-action report and a conversation with a veteran about said action. It is detailed, it is gripping, it is descriptive, and it is very colorful. I couldn’t stop reading. It was like meeting a veteran of that particular battle in a bar somewhere and he was telling me the story over a few beers. We spoke the same language, shared similar experiences, so I could appreciate his story and he could appreciate that he had an audience that understood.