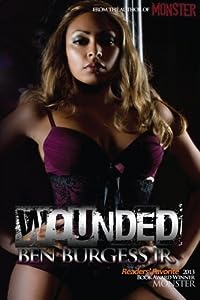 In Ben Burgess Jr.’s Wounded, Samantha Miller is a beautiful stripper who preys upon women - specifically straight or married women – walking on the dangerous path of violence, seduction, and exploitation. Her precarious ways are due to her troubled past when she was molested as a child and subsequently forced into prostitution by her drug-addicted mother. As a result, Samantha has no trust in men. When the beautiful Sasha starts to work at the strip club as a bartender, Samantha chooses her as the next target. But Sasha is not just another woman to be bedded. Samantha is about to learn how to trust, love and be happy again.

Protagonist Samantha or Sam is sexual and tough at the same time. She makes enough money as a stripper at J’s Gentlemen’s Quarters. Yet we see the cogent side of her as she does not plan to be a stripper for long and is working on building her photography business. Ironically, she uses photography as one of her seduction tools to persuade women to come to her place. Sasha also has issues of her own, but together these women try to heal each other, making Wounded a beautiful, emotionally raw story. To be frank, I didn't like what happened to Sasha. However, Samantha’s life turns out to be better in the end. As a reader who loves a positive ending, it is enough for me. On the whole, the book particularly excels at depicting complicated and realistic characters, making it a worthwhile read.