A Different Point of View Story 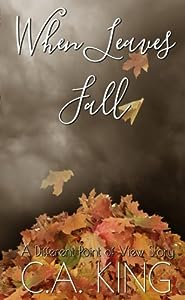 When Leaves Fall by C.A. King is a gripping story. Ralph, whose identity we have yet to learn, wakes up in a dilapidated shed. He is tied up by his neck and held captive there. He doesn't know where he is or why he is there. During Ralph's confinement, he is mistreated by his captor and fed only small portions of food that do not satiate his hunger. He believes that he committed a horrible crime to be treated in such a way. The only thing that keeps Ralph going is the idea of his family rescuing him from the shed.

When Leaves Fall by C.A. King is a powerful story that strikes at the hearts of everyone, even those made of the hardest stone. C.A. King builds intense suspense throughout his short story as he delays the revelation of the captor's identity and his place in Ralph's life. When Leaves Fall made me appreciate everything that I have in life, even the smallest of things. Ralph had close to nothing, although he captured my heart from the beginning and never released it. C.A. King's work struck me on a deeply emotional level and made me want to be more diligent in my community. When Leaves Fall conveys a strong message that drives the reader into action. It's a powerful and necessary story that tugs at your heartstrings and inspires you at the same time. I would definitely recommend this tragic thriller to any reader.