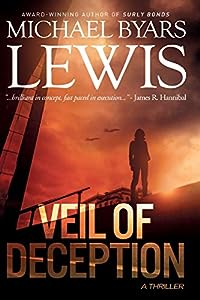 Veil of Deception by Michael Byars Lewis is a military tale. Jason Conrad is a captain in the Air Force as well as an instructor for the supersonic T-38. Jason’s life is on a downward spin but he is still seen as the best. While out on a training flight, the plane crashes although both pilots manage to eject in time. But now Jason is waiting to be kicked off the force; after all, this isn’t his first “accident.” He isn’t the only one who is shocked to find himself assigned to the US Air Force Test Flight Center instead of being kicked out, and when they assign him to a secret project he knows that all is not what it seems. Jason is caught up in the middle – on one side is the General who wants him out and on the other is a journalist who thinks he should be in prison and will do anything it takes to see him there. The secret project is about to take a mysterious turn when a blast from his past appears, along with a beautiful woman. What is the secret project and will it cost Jason more than his career?

Veil of Deception by Michael Byars Lewis is a thrilling read. Full of intrigue, the scene is nicely set at the start of the story. There is plenty going on, lots of twists and turns, and the plot is neatly written to hook the reader and draw them straight in – which it does. The characters were developed in a way that gave me time to get to know them through the story and form a “bond” with them. The storyline is full of intrigue and there is a lot of action. The whole story pulls together neatly, leading to a nail biting finish, and I guarantee that no reader will put this one down until it’s over. Mr. Lewis clearly demonstrates that he has the skills to compete with some of the top thriller and intrigue writers of today and I look forward to reading more from him in the near future.