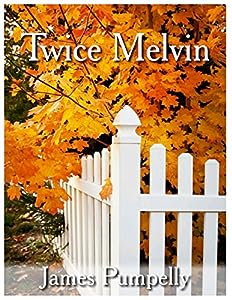 It all began the day of my funeral, relates the book's protagonist, Melvin Morrison - a spell-binding tale that begins with an ending. Traveling through millennia of recorded history, sparring characters draw the reader into compelling, real-life action with hero's and villains of eras long past.

Melvin, a deceased Vermont attorney, and Aunt Martha, Melvin's suddenly reappearing, self-appointed spirit guide, vie humorously over the trivial, heroically over the traumatic; their interaction, with dear ones left behind, the troubling constant holding the past and the possible in perilous proximity.

Melvin's last case is a suit against the Rogue Sperm Bank filed by Mr. and Mrs. Way - inversely referred to as Rogue vs Way - for the untimely death of their in vitro baby. After Melvin's death, Melody makes a withdrawal from the Rogue Bank, giving her deceased husband the opportunity to come back as his own son. (Hence the title, Twice Melvin.) But the problems are only beginning for Melody when Melvin reappears, in the whitest state in the Union, as a cuddlesome and controversial black baby. Rumors run rampant that Vincent TenKlei, a wealthy Rhodesian student at the village's acclaimed God-Hard College, has fumbled his way to fatherhood.

Enter interventions from the Beyond, and the disturbance proliferates! Tongue-in-cheek humor, heart-wrenching romance, or soul-searching tears, the reader will find it all here - including an ending that begins.