To Squeeze a Prairie Dog 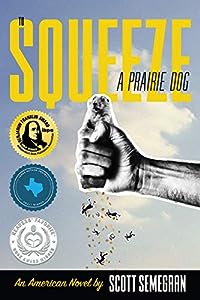 To Squeeze A Prairie Dog: An American Novel is a work of literary contemporary fiction by author Scott Semegran. Melding the genres of modern day folk tale with both satire and humor, the book centers on our unlikely hero, J.D. Wiswall. Working for the state government in a data entry department, J.D. becomes aware of a cost savings program where he could obtain a share of ten thousand dollars. When a scheme is developed to help the team win, however, the idea serves as a spark that sets off everyone around the department and beyond into the wider media. A whole series of secrets and lies is unveiled, all of which threaten to stop Unit 3 claiming their original prize.

As settings go for novels, this one was pretty strange but ultimately really different and refreshing to read. Viewed as a tale of camaraderie and the secrets that other people keep, the work that Scott Semegran puts into the intricacies of his large cast of characters is very impressive. The prose flows well and the dialogue is humorous and realistic, particularly for me in the tale of the alcoholic wannabe rock star Brent Baker who kind of stole the show. The plot certainly requires the concentration of literary fiction readers to keep track of it, particularly as more and more characters join the scene, but it all builds to an accomplished tale that’s well worth sticking with. Overall, To Squeeze a Prairie Dog is a recommended read for fans of humor, drama, and office politics.