They Must Be Monsters

A Modern-Day Witch Hunt - The untold story behind the McMartin phenomenon: the longest, most expensive criminal case in U.S. history 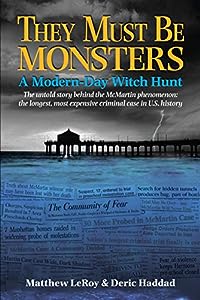 They Must Be Monsters: A Modern-Day Witch Hunt by Matthew LeRoy and Deric Haddad is the true story of the McMartin preschool trial and the phenomena that surrounded the longest and most expensive criminal case in U.S. history during the 1980s. A sinister and frightening tale, littered with accusations of child molestation, satanic abuse and animal sacrifice, this book is a valuable historical record of events that occurred during that time. The authors examine the facts objectively and rationally, interviewing those families closely involved in the case, and disclosing previously unpublished evidence. It has taken thirty years for this incredible inside story to finally be told.

Having had no knowledge of the case before I read this book, They Must Be Monsters drew me in and held me completely spellbound until the very last page. I could barely believe what I was reading as I was taken on a dark and sinister journey, a tale reminiscent of the Salem Witch Trials of the 1690s. Matthew LeRoy and Deric Haddad perfectly captured the sinister and toxic atmosphere of the time. The hysteria and lack of objectivity of ordinary people and the authorities involved in the case were absolutely shocking, redolent of the excesses of the McCarthy era of the 1950s. The background material and the depth of analysis provided by these two intrepid journalists are compelling and insightful. It is an utterly astounding and previously untold narrative describing a complex and dark period in U.S. history. I highly recommend it.