The Tribulations of August Barton 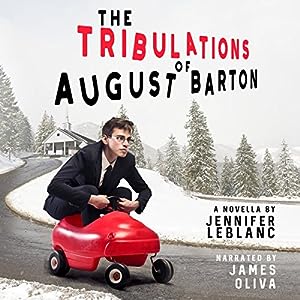 The Tribulations of August Barton is a work of mature humorous fiction penned by author Jennifer LeBlanc, and this audiobook edition was narrated by James Oliva. The plot centers around Augie, our title character, who faces a coming of age as he prepares for life at college. Threads of his life are unravelling around him as the year begins, tipping the already anxious Augie over the edge. Just when things seem impossible enough, his retired grandmother Gertie decides to make a break for it and escapes her nursing home. As a retired prostitute, Gertie’s attitude couldn’t be further from Augie’s if she tried, but their unlikely pairing provides plenty of laughter and heart as the tale spins on.

Author Jennifer LeBlanc presents a riotous novella as Augie learns how to be a man from a woman who’s been there and done it all, and now wants to do it all again. The character development gives The Tribulations of August Barton its special quality, because they are both over the top but also highly relatable and representative of so many issues that people are actually dealing with at that vulnerable going-into-college time of their lives.

In terms of audiobook quality, the editing and clarity were superb to bring this short novella-length tale to life with plenty of pace and pathos. I particularly liked James Oliva’s many voices, male and female, which he twisted and developed just slightly over the top in order to make the characters really pop from a comedic point of view. This is a highly recommended tale only enhanced further by its audiobook edition.