The Library of Secrets 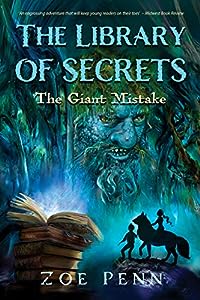 When someone comes to a children’s book like The Library of Secrets: The Giant Mistake written by Zoe Penn and illustrated by Z. Pahek, it is often uncertain what age group is targeted for readership. Sometimes, this age consideration remains unimportant; other times, it can make a difference in the intensity of interest for the reader. This book has many fine qualities – which shall be mentioned further – with the caveat that its main appeal – at least story-wise - seems most likely designed for pre-teens and younger teens. The only reason for mentioning this is that the interior illustrations used to headline individual chapters are more professional in scope and quality, and they might well draw the interest of someone expecting older, maybe young adult fiction.

Be that as it may, considering The Library of Secrets: The Giant Mistake within its most likely age category, Zoe Penn’s writing is highly creative, well plotted, filled with engaging characters both human and fantastic, and well spiced with many enjoyable twists and turns. Penn begins her tale of adventure with two children – a brother and a sister: Mark and Sophia – accidentally falling into the alternate reality of a strange, enticingly titled, recently discovered old book: Almation – The Book of Secrets. In order to navigate this odd but highly colorful new world, and in hopes of quickly returning home (there is a deadline), these sometimes-at-odds siblings must solve puzzles, answer riddles, and extricate themselves from several dangerous situations. New friends come often to their aid, however, turning their adventure into a humorous and fun romp for the pair. And for the younger reader, too.