The Lay of LaLa Land 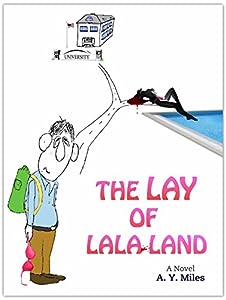 "I am hoping for a sequel. The Lay of LaLa Land
was undoubtedly an extraordinary page-turner."
- San Francisco Book Review

After being caught peeping in on his nubile young step-mom with his makeshift peeping contraption, 12 year-old Lenny Dushoff's abusive, gluttonous father sends him off to a mental hospital for a 72 hour psychiatric evaluation. In a year's time from the peeping incident, Lenny will suffer a great loss, one that will riddle him with guilt throughout his adolescence.

Seven years later, Lenny, now quiet, insecure and sexually inexperienced, escaped the trauma of his upbringing to the campus of a major university, where as a sophomore psychology major he finally finds the love that he’s dreamed of since boyhood.

But as boy meets girl, Lenny discovers Jane’s “dirty” secret, one that could destroy her entire life.

In a dramatic, darkly comic, but often absurdist coming of age tale about college sexual mayhem, Lenny uncovers the childhood roots of Jane’s human condition, and in the process, comes to a deeper understanding of his own.

"A.Y. Miles writes a brutally honest portrait of life, love, and reality in his book, The Lay of Lala Land... This book was one crazy ride from beginning to startling end."
- Seattle Book Review