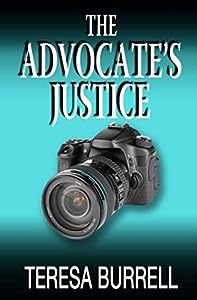 The Advocate's Justice (The Advocate Series) by Teresa Burrell is a murder mystery. Sabre Brown is an attorney with a job on her hands – to save Conner from a life behind bars. Fifteen-year-old Conner is accused of murdering Bullet, his grandma’s abusive boyfriend. The evidence is there; the boy did it. Things aren’t quite as straightforward as that, however. JP Torn, investigator and Sabre’s boyfriend, is Conner’s uncle and JP is about to come face to face with a brother he hasn’t seen in years. Sabre and JP settle into the investigation and the list of suspects grows as lies and sordid secrets come to the surface. JP's family has created a complex web that JP and Sabre must untangle to get to the truth.

The Advocate’s Justice (The Advocate Series) by Teresa Burrell is a great book. I haven’t read any of the Advocate Series until this one but I’ll be reading them now! The story has plenty of twists in it, as well as dead ends, red herrings and lots of action. It is a story that starts as it means to go on, right in the thick of the action and it doesn’t let up until the last page. The characters are developed well, considering how far through the series this is, and I feel that it could be read as a standalone story. The suspense builds and I thought I had it sussed early on – turned out I was wrong. Every character – from Conner, to his sister Morgan, from Muriel to Roxy, and a whole other cast in between – played their parts to make this a really good story, ideal for anyone who likes murder mysteries and legal stories; it’s made me want to get the rest of the series and read them all.