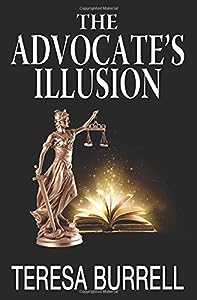 The Advocate’s Illusion by Teresa Burrell is the ninth in a series featuring the feisty and loveable Sabre Brown together with her long-suffering boyfriend JP, who doubles up as her private investigator. Ron, her brother, is also a part time member of the team. An interesting twist on the more common legal thriller, Sabre’s speciality is working for juveniles often when Social Services are involved, and in this book there are three such cases. Nine-year-old Sarah Parker is reported as being in danger living with her drug-addicted mother. In the Lynch case, the father, Tod, whose ex-wife with full custody moved away, cannot visit them and is incensed when he hears she is back on the drugs. He blames Sabre for the situation and threatens her. In the third case, the head of a small church marries his 12-year-old daughter to a forty-year-old member of his congregation. Does he have the legal right under the First Amendment? The stage is set for some interesting reading as Sabre attempts to get to the truth and argue in court for the best interests of the children she represents.

I can give no better praise for The Advocate’s Illusion by Teresa Burrell than to say I shall be looking out for the earlier books in the series, as I would like to read all of them. This was an easy read which kept me turning the pages. The characters – the heroine has a rather unbelievable name – come to life and I was particularly impressed with the natural dialogue which flowed seamlessly. I admit to guessing the end a little early but I had to read on to see if I was right. All the loose ends were neatly tied up with a satisfactory ending. A great book with a twist on the usual court room drama genre and recommended. I loved this book.