Song of the Tree Frogs 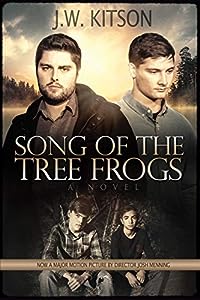 Song of the Tree Frogs is a work of harrowing realistic fiction with Christian themes, and was written by author J.W. Kitson. This family drama follows two connected families after a secret and a terrible murder force them to connect with one another in the aftermath. Phillip feels an overwhelming guilt and searches for forgiveness from his younger brother Michael, who was tormented for years by their father Tony. Tony has evidence from a long time ago that Michael may actually be someone else’s son, a man named Samuel, and Tony’s rage-fuelled actions bring Samuel back into the lives of both Phillip and Michael as the story becomes one of recovery, forgiveness and a new loving life.

J.W. Kitson has created an emotional triumph in Song of the Tree Frogs, which speaks a lot for the best qualities of the human condition, especially kindness and a sense of duty and service to others. Although these themes are brought about by its Christian morality, I believe that anyone of any faith can enjoy the heroism of Samuel and his wife, as well as the journey of exploration and acceptance that the boys go through after the grim events of the early section of the book. Although it is harrowing and there is much suffering in the tale, the scenes are delicately depicted and not gratuitous in nature, making this an accessible book for anyone who has suffered at the hands of another’s rage. Overall, I’d highly recommend Song of the Tree Frogs for fans of heart-wrenching family drama and tales of hope through adversity.