A Journey From Political Imprisonment To Freedom 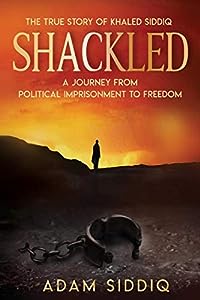 Shackled: A Journey From Political Imprisonment to Freedom by Adam Siddiq is the true story of Khaled Siddiq, a heartbreaking story of injustice and betrayal and a sinister plan to eliminate an entire family. Khaled is just six when his entire family and extended family are betrayed, his father exiled and his uncles executed. His family used to be favored by the King of Afghanistan, but now everything has changed with the new regime. This family of men who stood by the king ends up in a dungeon in one of the forgotten corners of Kabul. Follow this gritty tale of hardship, of painful loss, and hope. Young Khaled makes the best use of his time and studies, learning five different languages and philosophy. When this family is finally released, life will never be the way it once was and it is difficult to walk any street without feeling as though they were being followed. And can Khaled be reunited with his father?

This story of grit and a young man’s struggle to survive against impossible odds is beautifully told. I have read a few books from authors from Afghanistan — including The Kite Runner by Khaled Hosseini — and there is always this surprising blend of insight and humanity that emerges from the ashes, and Shackled handles this aspect of the story beautifully. The narrative is smooth and the setting comes out clearly, with copious references to the culture and the traditional language of the protagonist. Readers will understand what key moments and places are called in the protagonist’s language. This masterful handling of setting gives authenticity to the story and reinforces the realism in the narrative. Shackled: A Journey From Political Imprisonment to Freedom is deeply moving, infused with deep values of humanity, a tale of hope and resilience. It is an incredible journey to freedom.