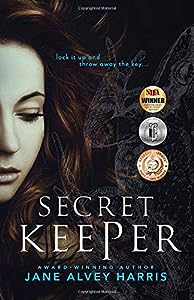 Secret Keeper by Jane Alvey Harris is the second book in the My Myth Trilogy, following the highly-rated first book, Riven. Secret Keeper continues on with Emily as she balances between a heartbreaking and hellish life in the world as we know it, and the First Realm of her brethren Fae, which has reshaped in its own tumult. In the here and now, Emily is crushed under the weight of a system that fails to protect her from a man - her father - whom no child should ever need protecting from, and a mother who is complicit under the guise of faith and dismissal. Forced to seek out her own healing and salvation, Emily is given a skeletal tool to begin an impossible-to-win but unthinkable-to-fail journey. "If you search, you’ll find the person with the wisdom to help you. A person who has so much authority, you have to believe what he or she says. A Champion."

Secret Keeper by Jane Alvey Harris is a wonderfully engrossing story that addresses the most horrid of social issues. Harris' writing is fresh, fluid, and often almost lyrical, with prose such as, "In a lazy line we encircle them, chins high, shoulders back, hips swaying… our center of gravity low. Minali runs an appraising finger across the back of Jacob’s shirt. Teagan winks at Gabe and licks her lips. Lionesses on the prowl, toying with their prey." The world building is phenomenal and on par with some of the best of fantasy writers. The lines blur sometimes and the transition from fantasy to reality often requires a reader to suspend disbelief, but in the context of Emily's story it isn't difficult. I'd recommend this book to the more mature YA readers out there who enjoy a layered and multidimensional fae world, who can also manage a backdrop that pains as much as it empowers.