The Recovery of an American Homestead Breed 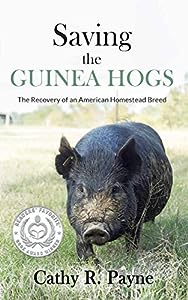 If you’re interested in the history of American farming and hog breeds in general or preserving heritage hog breeds from extinction in particular, Saving the Guinea Hogs: The Recovery of an American Homestead Breed by Cathy R. Payne is for you. I found it to be an utterly readable, well-organized, very comprehensive, and informative presentation on a topic about which I knew almost nothing but found fascinating. Too many plant and animal varieties have already been lost to the American continent. Once common on family farms, especially in the southern United States, the Guinea Hog was almost lost to the modern agribusiness emphasis on larger breeds that can be taken to market quickly.

“The American Guinea Hog is an old-fashioned heritage breed that was almost extinct in 2006,” Payne writes. “These homestead hogs are survivors and worth preserving for future generations.” In a preface to the book, Professor D. Phillip Sponenberg notes the importance of Payne’s work and praises her networking and teamwork approach as setting an example that could be used to save other local breeds as well. Payne wrote Saving the Guinea Hogs after she decided to become a small-scale sustainable farmer in her retirement years and wanted to raise this smaller, gentler, slower growing hog in part for its culinary appeal. Payne found almost no literature or research about the breed and set out to rectify the situation, especially when she realized that many of the old timer farmer breeders were passing away and with them a precious oral history. As a result, this book, other publications, and a web site now provide breeders, homesteaders, farm-to-table chefs, sustainable and hobby farmers, historians, and conservationists with valuable genetic information about this American landrace hog breed.