The Tales of Conor Archer, Vol. I 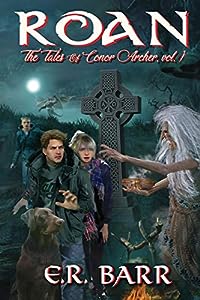 Conor Archer's life in Chicago has been a simple one. He has been home-schooled by his mother, Finola, and he spends his evenings playing music at a local pub. All that changes one night when he meets a strange, leather-clad man at that pub who gives him a strange liquor to drink and then savagely bites his hand, and later encounters a strangely beautiful woman who binds that wound with a cloth and pin. All the weirdness of these events is compounded by the death of his mother, who had been ill for some time. Her final instructions are for him to travel to a small town, Tinker's Grove, in Wisconsin, where his aunt Emily would care for him and continue his education. As he is travelling on the bus, his wounded hand festers, and he arrives at his destination more dead than alive.

"Roan" is not a book you should consider spending a long evening reading. It is not a fast and easy read, quickly absorbed and then forgotten. E.R. Barr's urban-epic fantasy is much more than that, and it should be savored. I quickly found myself enthralled by the characters and the plot, and became reluctant to hasten my adventure through this book. It is an amazing mix of urban and epic fantasy, shot through with Native American, Irish and Welsh mythology, people with characters who are both filled with human frailties and are larger-than-life. If you are like me and have become somewhat jaded by epic fantasy, you are in for an awesome treat. This is the real deal.