Among Us Trilogy - Book 3 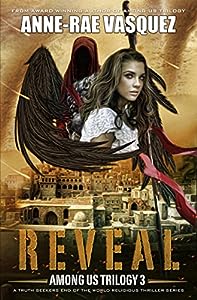 Reveal: Among Us Trilogy by Anne-Rae Vasquez is the third book in this science fiction/fantasy series. It all began with Cristal and Harry trying to find out what was really happening in the world and trying to find their missing parents at the same time. However, with time, these two people realize that things are far more complicated than they first anticipated. There are far more dangerous and competent players in this treacherous game and there is not much they can do about finding the Truth, unless they are ready to take a drastic risk. With the Beast and the false Messiah right in the middle of this fight, how can a man and a woman save humanity before the actual Messiah comes? Is there really a Messiah waiting to help them or are they on their own?

It was a little confusing at first, but that is not the story’s flaw or the author’s fault. As I had not read the previous two novels in the series, I had to take some time catching up with the characters and to find out what was happening in the story. But once I caught up, there was no stopping me. I have never connected with characters this fast, especially in a series like this where I read the last novel first. I absolutely enjoyed Cristal and Harry, how they became a team and took charge of the situation. I absolutely loved the fact that they were both a team and not a man leading the woman or vice versa. No one was standing on the sidelines waiting for the other person to take an action because both of them were the go-getters and doers. The flow of the story was great, the narration was engaging and the overall development was amazing as well. I really enjoyed it! A very entertaining read.