Civil War in the Crusader States 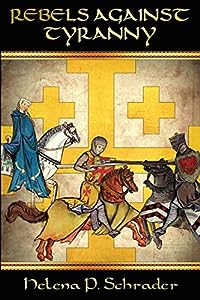 It is the 13th century, and a match between Sir Amaury Barlais and Sir Toringuel sees Amaury defeated. This failure sparks even more hatred from Amaury and this time he swears his revenge. Barlais and his two supportive friends, Cheneché and Bethsan, leave and later befriend Frederick II Hohenstaufen, feeding him lies about the Ibelins. Balian, the eldest son of John, Lord of Beirut, is still young when he witnesses the match. Being the eldest, his father is continuously hard on him, knowing that Balian will inherit his position as Lord of Beirut and head of the Ibelin family. When Balian encounters Frederick II, he is appalled at the monarch’s indifference to his uncle’s death and that of his own wife, Yolanda. This is the first of many encounters of Frederick’s inhumanity in Rebels against Tyranny by Helena P. Schrader.

The characters in the novel are very well drawn. Even though they are many in number, each of them fits into the plot and their roles are well expounded. The plot ties together and is brought alive by the vivid scenes and descriptions. Helena P. Schrader presents the way of life in the Crusader states and the turbulent battles the Ibelins forged against the tyrant. As much as historians point to Frederick II with much admiration, Schrader’s work helps in illuminating the more objective accounts written by Frederick’s contemporaries. The beautiful strand of romance in the plot made the book even more appealing. Rebels against Tyranny: Civil War in the Crusader States by Helena P. Schrader is a must-read for all lovers of history. It is not only revealing but also entrancing.