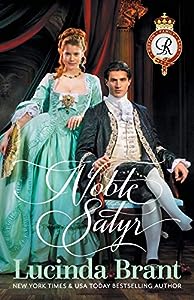 It is the golden age of French aristocratic life, the glittering court of Louis XV. Beneath the posturing and hedonism lies a seething hotbed of intrigue, deceit, and treachery. Sex, lies, and politics go hand in hand, and courting royal patronage is the ultimate prize. Into this licentious arena comes Antonia Moran, an innocent young woman, whose lack of protection makes her a prime target for the dissolute Comte de Salvan. He eyes this particular prize as a wife for his son, whom some say is mad. The Comte’s failing fortunes need a financial boost, and Antonia comes with an inheritance from her ailing grandfather. Anxious to see his granddaughter safely wed, the old man agrees to this unsuitable match. Moreover, unsuitable it is, since the Comte has designs on both Antonia’s impending fortune and her virtue.

Antonia may be innocent but she is not stupid. She cleverly allies herself with the Duke of Roxton, the ‘noble satyr’ of the title, whose tastes do not run to young girls. Roxton has no time for Antonia until the Comte forces his hand by attempting a violent abduction. To save Antonia, Roxton must take her to England, to the safety of his home. He is much older but she does not care. Her unabashed expressions of love for him slowly melt his icy demeanour. The inevitable happens, and it is not without consequences. The Comte, who nurses an old grudge against Roxton, will not give up and pursues his plan to the end. Can Antonia and Roxton’s love survive? And will it ultimately endure in the face of royal censure?

Anyone familiar with Lucinda Brant’s Georgian novels will relish this book. Brant has the ability to transport the reader back in time, to a bygone era, without swamping the story with facts. The characters live and breathe the atmosphere of the time; they are captivating, from the primary players, right down to the smaller, but no less important characters. Ultimately, this is an enchanting and powerful love story between two people, Antonia and Roxton, who have all the odds stacked against them. I thoroughly enjoyed the unfolding of this passionate romance, with added action and adventure, derring-do, and some narrow escapes! For readers who like intricate detail there is a wealth of carefully chosen gems to enhance the picture. Everything the author describes enhances the reader’s enjoyment of a truly historical romance. I loved it. This is the first book in the Roxton series. Highly recommended.