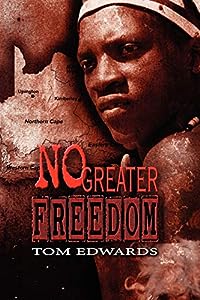 The setting for No Greater Freedom encompasses South Africa and those East African countries as far up as Kenya. Some of the action takes place in the Comores and the Maldive Islands and parts of Asia. Police investigations are initiated after the discovery that weapons are being stockpiled in various townships in and around Natal. It is suspected that moves are afoot in the Zulu nation to separate from the Republic and create a separate homeland. The savage killing of a police investigator in the Cape Town dock area throws suspicion on an ancient tramping passenger ship, the SS Galatea. Steve Konig, a detective inspector, joins the ship hoping to find evidence that would prove that the ship was being used to deliver the weapons from somewhere further north. Unknown to Steve, another detective, Francis Mackenzie, a very black African, has initiated his own investigation into a poaching racket operating in the game reserve near the Serengeti Plain to the south of Kenya - the two investigations are destined to merge. The story involves Pat Ellis, a minister in the government department of Internal Security, who operates a wide network of corruption. A man with appalling sexual appetites who terrorises his female servants; his beautiful secretary, Julie, who in all innocence becomes involved in his evil plans, and Jake and his crew on the yacht Arcturus who smuggle drugs from Malaysia and Columbia and deliver them to Pat's network operating in the African townships. It involves the crew of the yacht Epicure, Eric, Jason, Beppy and Jane who are lured on board Arcturus, where the men are murdered and the women raped and abused in the foulest manner; and of Jane, who escapes and exacts her vengeance. This is a story in which a beautiful woman gives her life to save the man she loves. It is a story of Zulu aspirations; corruption in high places; cruelty and perversion. It reaches into the depths of depravity and soars into the heights of love and sacrifice. It is a story of Africa. Tom Edwards was born in Hampshire, England, where he spent his early years. After completing his education he served for six years in the Fleet Air Arm branch of the Royal Navy. Leaving the service he made his living for several years as an artist before moving to Southern Africa, where he worked as a free-lance news reporter for various newspapers and then as an engineer on various mines in South Africa, Zambia and Namibia, finally settling in what was then Rhodesia. During the Rhodesian conflict he joined the reserve branch of the security forces where he served on border patrol and in the Marine Division. It was there that he acquired much of the material for his first book 'If I Should Die'. The war being lost, depending on which side you were on, he and a friend bought a thirty-foot boat in England and sailed around the world for four years; a trip bedevilled by pirates and hurricanes. They were finally shipwrecked off the coast of New Zealand and had to work there for a year to repair the boat. They carried on to Australia where Tom's partner left him to return home. Tom continued on his own to South Africa and eventually back to Australia where he became an Australian citizen. His latest adventure was to walk from John O'Groats, in the north of Scotland to Land's End in the south of England, a distance of 1440km, which took him forty-six days to complete. Tom has now retired to Lake Macquarie where he enjoys writing, painting and walking. His first two books, "If I Should Die" and "No Greater Freedom" were written under the pseudonym of Tom Hampshire in the hope of preserving his anonymity, however at the insistence of his family his later books, including a factual account of his circumnavigation in a thirty foot boat were under his correct name.
Contact Author -