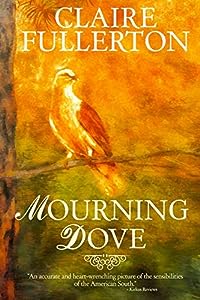 Mourning Dove by Claire Fullerton is historical fiction at its best. The novel begins in America during the 1960s and charts the lives of Posey and her two offspring, Millie and Finley. Originally from Minnesota, the two youngsters are shunted to their mother's childhood home in Memphis. Here, they become immersed in tradition and a set of bewildering societal rules. Posey, who has been trained in the nuances and manners required to survive in such an environment, is in her element. She is like a musician playing expertly to a tune she knows off by heart. The children watch and learn, but never fully become a part of the Memphis experience. This book weaves a story of wealth and privilege which buffered families against tragedy but did not fully protect them from it.

Claire Fullerton creates a wonderfully atmospheric coming of age drama. The lives of wealthy families in the deep South is depicted with a gracefulness and eloquence that characterized society at that time. Manners and duty were maxims of the day. However, beneath the rather thick veneer of propriety lurked a raft of issues, including racial tension and the seemingly desperate need to conform to a rather absurd strict code of conduct. The writing is often haunting. It depicts lives where families were inextricably interconnected and good lineage paramount. I enjoyed this book tremendously. I was drawn in and mesmerized by the narrative. Mourning Dove was thoughtful, wonderfully descriptive and incredibly insightful. I did not want it to end.