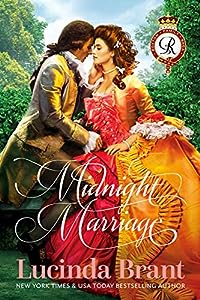 "Midnight Marriage" continues the saga of the Roxton family, which began with "Noble Satyr" (recently reviewed). Antonia and Roxton’s son, Julian, is wayward and headstrong, to the point where his father, fearing he will either make a disastrous marriage or litter the country with illegitimate by-blows, arranges a match between the youthful Julian and Deborah Cavendish. Deborah has no recollection of her midnight marriage at the age of twelve to a weeping, bellicose teenager. Julian is sent to the Continent to improve his ways, while Deborah continues her life. She proves to have an equally headstrong nature, to the despair of her older brother, Gerald, who has hopes of seeing her settle down in a respectable union with Julian in the future. When Deborah finds an injured duelist in the forest near her home, she has no idea who the handsome stranger might be, let alone that she is his wife. When Julian discovers her identity, he makes haste to propose and whisk her off into married life. But Julian’s chequered past and reputation as a libertine catches up with him, in the form of a lawsuit brought by an irate French father, accusing Julian of seducing his daughter. Deborah also finds out that she is married to the degenerate Marquis of Alston, and if that is so, then what will happen to the love for Julian Hesham whom she adores? Can she reconcile her feelings for the man she loves with her contempt for the man she married?

Another gem from Lucinda Brant’s pen takes readers back into the loves and lives of the Roxtons and to the Georgian era. The plot is intriguing as hints of dark secrets and strange motives gradually unfold. People with both personal and political motives in engineering this match (or sabotaging it) surround Deborah. Whom can she trust? The energy in this novel starts on page one with a mysterious midnight marriage that sets the tone and pace. The action continues and never lets up. Brant isn’t afraid to subject her heroine to a tumultuous roller-coaster of events, and feisty Deborah is up to it! The love story between Julian and Deborah is tender, and filled with the kind of blunders young people make when setting out on the rocky road of true love. Nice twists and turns, dramatic revelations, and some enjoyable chaos make this a book that keeps the reader turning the pages. They will not be disappointed. Highly recommended!