Meet Me Under the Stars 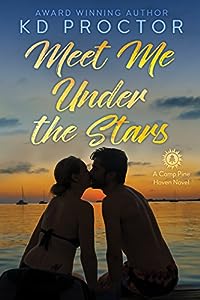 Meet Me Under the Stars by KD Proctor is a tantalizing romance between two irresistible characters — DIY TV star Charlie and a handsome British guy, Nate. It has been three years since Charlie dumped Nate, out of fear of hurting him. She has secrets of her own, but she has never stopped loving him. Nate believes that Charlie never loved him, that she’s been cruel to him. Yet, he still can’t get over losing her. But the last wishes of Gwen, Charlie’s sister, will have the two working together to fulfill that wish, something that also stops Nate from being deported to England to face a family that has already disowned him. Will they have the courage to seize this second chance and make it work?

This is what a real romance feels like — not-so-perfect, genuinely and humanly flawed characters seeking to understand who they are and how they feel, an intense emotional conflict, and a strong plot. Each character is broken in their unique way. The story has many emotional layers and it was just gorgeous watching Nate suffer, clueless of why Charlie would break up with him. KD Proctor has the gift of transporting readers into the hearts of the characters, making them feel the heat, suffer the suspense, and anticipate the outcome.

The realism in this story lifts its level of entertainment and allows readers to see something of themselves in the characters. A fierce romance that will arrest your attention right up to its predictable but satisfying denouement, with writing that is colorful, filled with witticism and a rare sense of humor conveyed through exciting and engaging dialogues. Meet Me Under the Stars turns up the heat and makes sure it stays high.