March of the Gnomes 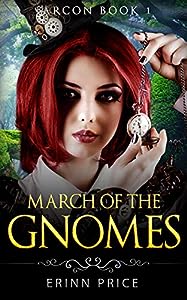 March of the Gnomes by Erinn Price is a fantasy novel you cannot put down. Alexis Dumont finds herself alone in her sister’s house while Morgan cares for their parents after an accident. Alexis is the athletic one of the family, but a broken leg leaves her restless. Her sister is a developer of organic bio-nanotechnology and her testing equipment allows Alexis freedom to move around without damaging her leg further. So begins her adventure in ArcOn, an AI video game. The game fits the character with the personality of the player. She gets a gnome, and for some unknown reason other characters bully and troll them. But she has a plan and she will not back down on her promise to help the one person she thought she would never get along with. Her commitment drives her to motivate the other gnomes, but their activity will not go unnoticed.

I found March of the Gnomes compelling from the beginning. Erinn Price has developed a complete world within this steampunk fantasy that draws the reader into its realm. I enjoyed the teamwork between the players. Price included stats to give this a video game feel which gamers will appreciate. I learned much about the gaming world as I learned along with Alexis. There is also a mystery concerning the aggressive behavior towards the gnomes and what is causing it. I love how the overseers work to see that the game is fair for all the players, even cheering for the unpopular. I would recommend this well-edited novel to those who love fantasy or gaming.