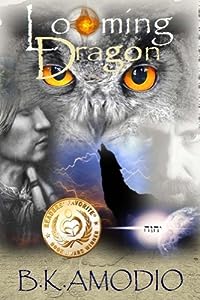 Looming Dragon (The DiujPa Series) by B.K. Amodio is part of the DiujPa novel series. The main character, Cayce Taylor, is a sensitive and intelligent teenage boy living in New Mexico. His mother mysteriously died from a coma and his father is an alcoholic. But this adversity belies his fate. Chief Mar, a revered elder of the Annanuki tribe, explains that he has been protected his whole life. He is the chosen one who will be given a gift from the MOTHER and a burden. Soon, he will replace Chief Mar, the DiujPa. He will become a priest forever. But only if Taylor survives an evil plan of destruction as orchestrated by Adsu Gulden, the former god turned mere mortal who wants nothing more than to kill Taylor and assume his rulership of the new world.

Looming Dragon had Christian-like underpinnings, especially regarding the depiction of Melchizedek, the priest, e.g. YAHWEH, “his deeds were told for generations” and the disposal of all the newborns by the king. B.K. Amodio is an imaginative writer who draws his readers with common and esoteric concepts. His signature style continued -- mythical elements, complex characters and the overarching theme of good versus evil. Amodio enlisted in the U.S. Navy in 1990. He received several prestigious awards including two Humanitarian Service Medals. He has a degree in information technology. He has written Coming Savior, Looming Dragon (Volume 1) published in 2012 and a subsequent release of the same title in 2013. Looming Dragon is highly recommended.