Kicking the Bear out of the Bedroom 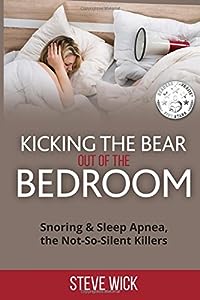 Kicking the Bear Out of the Bedroom: Snoring & Sleep Apnea, the Not-So-Silent Killers is a non-fiction health and wellness book written by Steve Wick. Wick never thought of himself as having sleep apnea or even being much of a snorer, that is, until his wife started elbowing him in the ribs to wake him up repeatedly throughout the night. He still didn’t think it was that big a problem. What was bothering him was his Restless Leg Syndrome (RLS). He had always suffered with that, and he blamed the less than optimal quality of his sleeping on that problem. When he saw a commercial touting a prescription drug for RLS, he went to his doctor and asked for a prescription. She refused him at first, stating her belief that he had sleep issues. At her orders, he went to see a sleep specialist who scheduled him for a sleep study. To Wick’s surprise, he had severe sleep apnea and was prescribed a CPAP machine. Like many other patients who’ve been fitted with a CPAP, Wick soon found the device was too intrusive and restricting. It was when his wife announced her pregnancy, and his insurance agent refused to write a life insurance policy based on his sleep apnea, that Wick decided to explore the other remedies available to sufferers of this condition.

Steve Wick’s non-fiction health and wellness book, Kicking the Bear Out of the Bedroom: Snoring & Sleep Apnea, the Not-So-Silent Killers, presents the startlingly serious facts and figures about the perils snoring and sleep apnea pose to your health. He writes in a conversational manner, using his own story as illustrative in showing what the disease is, how it can impact your health, and what you can do about it. While I had heard of the CPAP machines and wondered how anyone could actually get used to using one, I was not familiar with the specialized custom mouth guards and surgical options that are available for those with this mostly chronic condition. Wick’s own story details his improved health after having been fitted with a custom device. He also includes a glossary of terms and resources for those readers who would like more information, as well as two tests that can help you determine if you might be at risk for sleep apnea. Kicking the Bear Out of the Bedroom: Snoring & Sleep Apnea, the Not-So-Silent Killers is one of those books you should seriously consider giving to a loved one who snores or has mentioned his/her problems using a CPAP machine. It’s highly recommended.