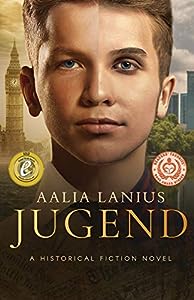 In 1933, after Hitler's rise to power, the paramilitary HitlerJugend, or Hitler Youth, became the only permitted youth organization in Germany, then known as The Third Reich.

It's 1937 now, and a fourteen-year-old German youth, Ernst, is part of a secret mission which will send a group of teen-aged boys to London under the pretense of a bicycle tour to spy for the Nazis. The cyclists' objective: identify both geographical and human targets for subsequent elimination as Europe approaches a flashpoint that Hitler intends to exploit by waging all-out war. Ernst's mentor, Officer Müller, considers him the perfect fit for a special assignment--spy on a wealthy British Jewish family considered a threat to the Reich as they shelter Jewish refugees from Nazi oppression.

In a parallel story, a modern-day American teen-aged orphan, Clark, has fallen under the spell of white supremacy ideology after a series of family misfortunes. Having lost his mother as a child to cancer and then his father a couple of years later to war in Iraq, he is in the hands of his unscrupulous guardian who manages to plant him as a child-agent in a Muslim household. Clark's purpose: prove that the randomly-chosen Muslim family must be terrorists.

Each youth approaches his assignment with a masked heart filled with hate and a deep misunderstanding of who his hosts are, roiling the boys in emotional conflict as events unfold, and forcing each to face what will be the hardest decision of his entire life--help destroy what his handlers fear or find the courage to think for himself and face the consequences.