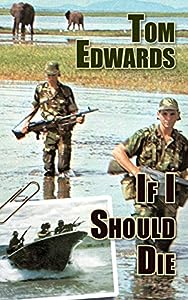 If I Should Die is the story of war torn Africa when nations were determined to throw off the last vestiges of colonial rule for self-determination. It is a story of violence set against the breathtaking beauty of the fictitious nation of Nyanga. Students of history will know the real country and remember the terrible misery imposed on its population when savagery and extreme viciousness was so often inflicted upon scores of peaceful farmers and farm workers.

This is not a story just about blacks against whites, since both were killed with equal cruelty. It is more of resistance to change on one side, and the righting of past wrongs on the other. This is a story of a war men fight, knowing in the end they cannot win, but they fight anyway, because it's their job.

As the fight unfolds, it becomes personal for two combatants, the best each side has to offer, and even more so when Sergeant Wilson is severely wounded and taken away for interrogation. Desperate efforts to rescue the Sergeant are made, as a band of comrades attempt from one side, and his fiancé tries another way. But, will they be successful?

Set in a time of terrible strife, the author has put together a very thorough, but intense look at Africa and its struggles. The characterization is first rate as both sides are shown as history reports them to have been. The plot is set as a work of fiction, but the author has indicated it is partially based on a true story. I have no reason to doubt this. Some readers may find the graphic violence and excessive brutality to be excessive; however, as history tells, that was the way it really happened. Very nicely done.