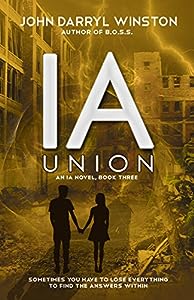 IA: Union, Book 3 is a paranormal science fiction/coming of age novel for young adults, written by John Darryl Winston. While the author does give sufficient background information to enable this book to be read on its own, I would advise working through this series in order to get the full impact of the continuing story.

Naz and Harvis had a plan to get themselves kicked out of the International Academy and sent back to the Exclave -- a move that would have many scratching their heads in confusion. It was indeed a reversal from when Naz and his little sister, Meri, sat for the exams that would enable them to leave the Exclave behind. Now, however, Naz wanted answers. He needed to know why Meri had to die and whether the rumors that his father was still alive were true. Even more importantly, he wanted to remember what happened four years ago, that time frame which was so frustratingly blank. The realization that the other people in his life, like Dr. Gwen, Harvis, and Coach Fears probably had some of the answers to his questions was likewise infuriating. Their plan was simple, though the execution of it would be abhorrent to everything the two fourteen-year-olds believed in.

John Darryl Winston’s paranormal science fiction/coming of age novel for young adults, IA: Union, Book 3, is an intense and absorbing story that explores the uncharted potential of the human brain as a young orphan with startlingly powerful abilities learns to channel them and tries to differentiate between those he can and cannot trust. The friendship of Harvis and Naz is marvelously portrayed in this tale as the two friends look out for each other and work so well as a synergistic team. Winston’s descriptions of their sparring practices rank up there with the some of the best of martial arts writing. Naz comes of age in this powerful third book of the series, and the challenges he faces are formidable indeed. IA: Union, Book 3 is most highly recommended.