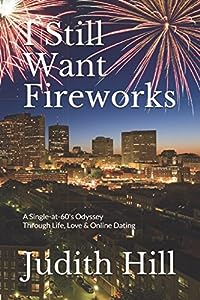 On the one year anniversary of her divorce, former romance author Judith Hill signs up on a well-known online dating site. Now an international flight attendant (with a penchant for dating young, dark, long-haired and exotic), the multi-published fiction writer decides to hedge her innate skepticism with a purposeful plan. She will chronicle her experiences into a humor/how-to memoir geared to other women similarly starting over. There are two problems with her plan . . . technology and the reality of virtual reality dating. When last she dated, a "web site" was where a spider named Charlotte did her thing in a barn for a rat! But worse (for a self avowed techno-idiot) is the world she discovers. Like Alice tumbling down the rabbit-hole, she lands in a foreign and strange place called "Online Dating." Anonymity and superficiality rule, and normal patterns of human behavior and traditional social mores seem not to apply. Before realizing it, she, too, falls victim to the mindset, abandoning her common sense, sexual boundaries - and even her own compassion. Initially jamada (as she is now known by her user ID) is determined to keep to type, ala her last relationship: a 38-year-old Turkish restaurant owner who took her for a midnight swim in a Swiss lake for their first date. Indeed, her first internet experience, with a widowed Italian engineer in his late 40s, appears to perfectly fit her bill - until phone conversations reveal an extreme religious leaning. Undeterred, she moves on to a gorgeous 42-year-old Israeli lawyer who after a month disappears. Suddenly, the online store of long and dark-haired exotic men in the greater Philadelphia area runs out of stock, and jamada is reduced to boring, boorish, gross and old (as in claiming 60, but looking 70). Clearly the 37-year-old Tunisian concierge who asked her out in a Munich hotel lobby does NOT have a slightly older brother or cousin in Philly on Match.com! Then, on the night of her dreaded 60th birthday, as she's sitting on the patio of a local Irish bar sneaking a cigarette, the cosmos delivers a birthday present she does not expect. A broad-shouldered, blond (!), short-haired (!) mechanic enters and sparks fly . . . Written as a weekly journal in an intimate girlfriend to girlfriend style, with chapter titles such as "The Penis Does the Picking," "Goldilocks vs. the Pea Princess" and "Talk Dirty to Me," I STILL WANT FIREWORKS is an hysterical and honest look at life, love and online dating from the perspective of a woman who knows she is old enough to know better. From discourses about wisdom and wrinkles, celibacy vs. settling and "want" as opposed to "need," to forays with texting and sexting strangers, to speed dating, blind dates and bar hook ups, Judith Hill holds nothing back. Fans of her humor blog, singleat60sucks.com, are well acquainted with Judith's unique mix of sex and sass wrapped in wit, humor and bona fide research. While her followers call her "raw, down to earth and amazingly funny," she prefers "irreverent, relavent and bold." I STILL WANT FIREWORKS delivers on all accounts. A candid story of self discovery that will resonate with all women, but particularly with those over 40, this is a must read for any woman curious about online dating. With practical topics such as romance frauds and scams, profile hacking and the social paradoxes and ramifications of online dating, interwoven with real life encounters that are comical, provocative and even frightening, I STILL WANT FIREWORKS is the ultimate girlfriend's guide. Witty, sophisticated and sexy, here is a side of online dating the TV ads don't tell - written by a woman who will dispel every notion and preconception held about a single-at-60-year-old.
Contact Author -