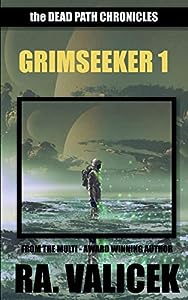 Grimseeker 1 is a darkly paranormal fiction novel by multi-award-winning author Richard A. Valicek, and forms Book Three of The Dead Path Chronicles. This multi-layered, multi-genre novel begins on the planet of Alamptria, a high-concept world where a powerful formation of knights battle against vampires, Goncools and demons beyond belief. We follow the adventures of the knights Petoshine, Caprius, Andromin and Dragus as they travel to foreign climes, dispelling myths and fulfilling prophetic destinies wherever they go. Exciting travelogue aside, a deeper darkness is waiting to be unleashed. The demonic lord Makoor has a plot to release The Grim Seeker to destroy the knights’ home kingdom of Elysium, and this quest might just be a little too big for the terrific trio.

Richard A. Valicek packs an awful lot into this story. I would definitely recommend reading the previous novels in The Dead Path Chronicles, as I felt a little lost being thrown into such a highly detailed world and taking off at breakneck speed into adventure. That said, Grimseeker 1 is a wild ride that I couldn’t predict from paragraph to paragraph, let alone page to page. I felt most drawn to the very noble Andromin of the three knights, but every character in this chronicle felt as though it had been lifted out of mythology and given a lusciously dark new coat of paint. Valicek certainly knows his world and his classical literature influences shine through, mixing the excitement of modern vampiric dramas with old-school world-building and storytelling in the tradition of Tolkien.