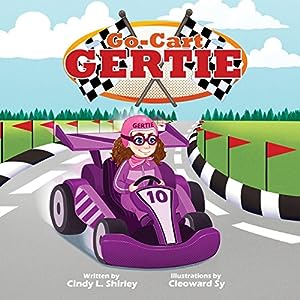 Go-Cart Gertie is an action and adventure, social issues graphic book for children and preteens written and illustrated by Cindy Shirley. Ten-year-old Gertie wished that she could hang out with her big brother and his friends. She was tired of going to school and coming home, and wanted to have the freedom her eighth-grade brother had. Gertie especially didn’t want to take the bus to school anymore. Her mom and dad were sympathetic, but they felt she needed to be a little older before she got some of those privileges. Gertie really didn’t like being smaller than and getting teased by Greg. She needed something to make life fun and interesting again. Then, she saw the used go-cart outside the toy store the family was driving past. Gertie loved watching car races with her dad and had always dreamed of having a go-cart. Her dad was actually considering her request to buy it, and her mom, well, her mom would probably have needed a bit more persuading, until Greg started laughing at his sister and saying that girls can’t race. That made up her mom’s mind. Gertie would get that go-cart, and she’d show the world, and Greg, that girls certainly can race.

Go-Cart Gertie lets kids know that it’s cool to have interests even if they’re not something that girls or boys are traditionally supposed to be able to do. And while playing with a baby little sister, or dolls for that matter, is always a nice thing to do, if a child is so inclined, I appreciated Gertie’s preference for something more active and adventurous. This book is particularly important in the messages it sends to kids who may not feel as confident as Gertie in asserting their non-gender specific interests. I also loved how Gertie and Greg’s sibling rivalry became more of a supportive team effort when race day arrives. Go-Cart Gertie is a grand selection for story time; one that will get young kids dreaming without limitations based on gender expectations. It’s also a well-written and challenging text for young readers. It’s most highly recommended.