Strange historical facts reimagined in the world of Donald Trump 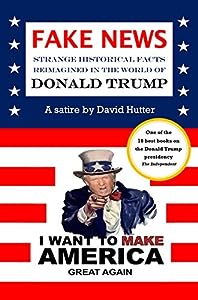 Like the reality behind the term made famous by this book’s leading character, one is never quite so sure that what he reads is not truer than the facts – if one is reading Fake News by David Hutter. The subtitle best explains the premise of this funny, funny book: “Strange historical facts reimagined in the world of Donald Trump.” By now, the cast is all too familiar. The names of Trump’s cabinet and advisers are household names. But Mr. Hutter takes us back to the beginning (Inauguration Day), when our newly elected “greatest-President-ever” assumed this republic’s throne, deciding on Day One to replace the Lincoln Memorial with one of his very own and, oh-by-the-way, to suddenly declare war on North Korea by way of Twitter. It’s all going to be okay. Ivanka approves. And he trusts Ivanka.

This will give you a taste of David Hutter’s more-than-satirical treatise on Mr. Trump’s dubious ascension, and will provide you with an early warning that all the contents of this funny book may indeed be Fake News. What is not fake is Mr. Hutter’s keen attention to the quirks and foibles, the tones and attitudes, and the incredibly misinformed antics of our country’s first lunatic – not a political stance or conjecture, mind you; simply a statement of the news. The reader feels as if he has gained front row access to the crazy show, with only one choice left for him to make: to laugh or cry. I guarantee you, this book will make you weep with glee. But the truly ingenious part of this book is that David Hutter follows each Fake News chapter with reports on similar real-world historical events (fascinating trivia), proving in the end that Trump and readers have all been here before.