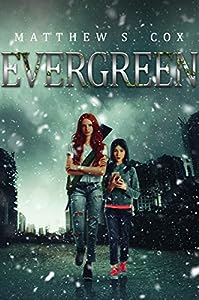 Evergreen by Matthew S. Cox is a young adult science fiction novel about a seventeen-year-old girl called Harper Cody who has been plunged into an apocalyptic scenario caused by a nuclear flash. Her life changes irrevocably. She spends two months, together with her parents and younger sister, hiding out in the basement of the family house in a town called Lakewood. They live on canned food that her father scavenges from nearby. Passing evacuees tell of a haven in the mountains but her father refuses to leave the ostensible safety of their house. Eventually, a dangerous gang of looters finds them and, after a fight, Harper's parents are killed. Despite Harper's prowess in competition shooting, she realizes it has not prepared her for pulling a gun on a real person. The sisters are forced to flee the house with nothing but the clothes they have on.

The unpredictable nature of life in this desolate new world provides an edgy background to the familiar 'the end of the world as we know it' story line. The realistic description of the breakdown of society is explored from Harper's point of view and teenagers will have no trouble identifying with her. In fact, Matthew Cox serves up a great selection of strong and interesting characters in this novel. I couldn't wait to see how Harper and her sister dealt with the loss of their parents and was not disappointed with the way the plot developed. Evergreen is a great introduction to a science fiction dystopian first novel for young adults. Anyone interested in this genre should definitely have this book on their reading list.