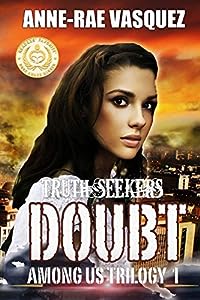 Doubt by Anne-Rae Vasquez is about the Truth Seekers and their mission to find the truth. Originally an online role-playing game, creator Harry Doubt takes the game offline in the hopes of finding out what happened to his mother who disappeared. Harry continues his father's work with a man his father worked with and eventually discovers that the man knows more that he says. Harry quickly learns that things aren't what they seem when things start happening that he had no reason to believe would happen. Cristal, one of Harry's top Truth Seekers, is quickly pulled into what is going on and starts to learn the truth behind the strange things that have been happening to her all her life. With the help of a fellow Truth Seeker, Cristal and Harry find that things are very different, but that there is hope of finding Harry's missing mother and Cristal's missing father.

Doubt by Anne-Rae Vasquez is really slow-paced but then starts to pick up, and once that happened the book became amazing. Doubt is well written with great imagery and some plot twists that I never saw coming. There aren't many books that have such a unique plot twist. Once religion is brought into Doubt, the book gets a little weird but when the pieces start falling into place it making sense. When the background stories of some of the paranormal creatures come to light, the book gets even better. There were two thing about Doubt that I didn't enjoy but the book was so awesome that it was easy to overlook.