Diary of the Dragon's Daughter

Painting as a Window into Chinese History 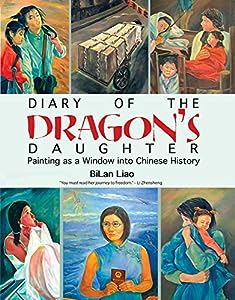 The book includes three series of artwork. "Painting as a window into Chinese History" is about the five generations of women in the author's family who experienced abuse, neglect, starvation and the death of her father and her sister. The author had to work as a welder at the age of fourteen. Soon she was assigned to a project in a wasteland where she lived in a morgue that was still surrounded by many graves and ghosts. Later she worked as a welder in a church that had been turned into a factory. During this dark period, all the schools were closed, and the books were destroyed. She received her education in hiding from her capitalist colleagues to kept alive her "America Dream." "Coming into Tibet" is her attempt to capture the vastness of the landscapes and the beauty of the Tibetan people. The "Return" series is about the impact of war on women around the world. In this second edition BiLan added the chapter "My Life in America," now expanding the book to 254 pages, including 54 color pages accompanied by over 500 images. "A moving, beautifully told, magnificently illustrated story of one woman and her family's ordeal during decades of persecution by the Chinese Communist Party." - Frank Dikotter "Her life in the U.S. which is especially relevant today - during a time when many immigrants are being viewed with such negativity...." - Vance Farrow "Her journey is heroic, and her telling is educational and inspirational. Her paintings require one to ask more questions...." - Sue Ann Taylor, "Diary of the Dragon's Daughter has inspired me to stay true to my own dreams and to seek ever greater goals in my own life." - Leslie Safford
Contact Author -